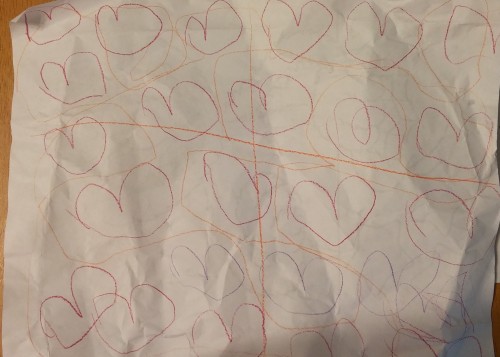 I sat down this weekend to do some recreational mathematics with a friend.  Maybe you know him; his name is Justin Aion.  He writes a pretty cool blog over at Re-Learning to Teach.

I made it a goal of mine this year to work on some geometry for a few reasons.  First, I’m not that great at it.  Second, the students at our school historically struggle with it as well.  Two of the problems we chose were from the Five Triangles blog.  And to be completely honest, I sucked.  I sucked a lot.  I sat there for much of the Google Hangout drawing and drawing the figures and then writing down what Justin had eloquently discovered.  And then nodding in agreement. Here are pictures of Justin’s and my respective work:

Then we decided to work on something I thought was more my cup-o-mathematics tea.  Turning to the Math Forum, we tried this weeks scenario for Trig/Calculus.  How silly of me to assume that since this is just the beginning of the school year, perhaps the task could be solved using Algebra.  Of course Justin busted out the calculus seamlessly and like a pig in numerical-feces, excitedly worked his way to viable solution. (It turns out that applying algebra to this problem was not as straight forward as it might have seemed.) Again, I felt defeated by the mathematics.

The point here is that doing math that’s unfamiliar is hard.   Thinking deeply about problems is hard work.  Applying previous knowledge to a new situation is also taxing.  What I really took away from hours of difficult mathematics was an empathy for the anxiety of many of my students when I ask them to do the same.  It is disingenuous of me to expect my students to persevere through problems if I’m not willing to do the same.  So, I’m committing to being uncomfortable, mathematically, and I will get better.  My geometry skills will improve, and perhaps I’ll be able to revisit my long lost calculus pals, derivative and integral.  The important thing is that I’m willing to try and willing to fail.   In the long run, I think my students will benefit, and I know that I will as a teacher.