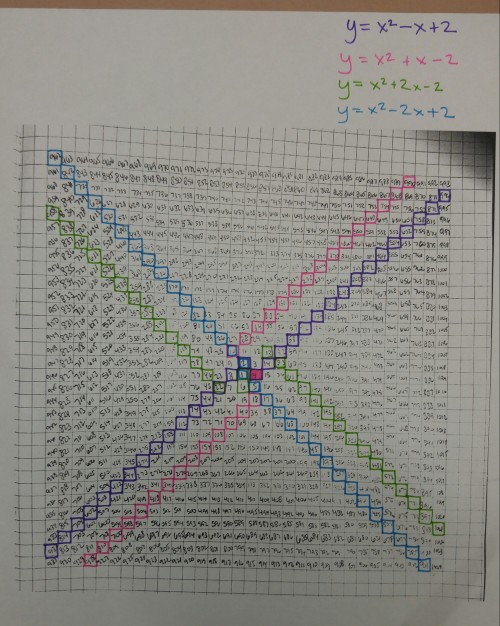 I think math is neat.   I like to play with math.  And sometimes I come up with something that supports my theory that math is neat.

First, I took the numbers 1 – 100 and spiralled them around some regular graph paper.  I wondered what would happen if I colored in the multiples of 4.  I examined my work and thought, “Huh.  Well that’s neat.”

Of course then I needed to spiral even more numbers and test out everything I could think of.  Multiples of 5, 6, 7 and so on.  Linear patterns, quadratic patterns, prime num…nope, nevermind.  I don’t do prime numbers.

Anyway, it’s that time of the school year where stress relief is necessary so I have been playing with these spirals for over a week. Today I came up with something worth sharing on my blog.  I took the positive y-values of y = x^2, y = x^2 + x, y = x^2 + 2x and so on, and colored those squares.  Then I put the images together and made a gif. Obviously, holding the camera at a steady angle is not a skill I have mastered.  But I still think it’s pretty darn neat.