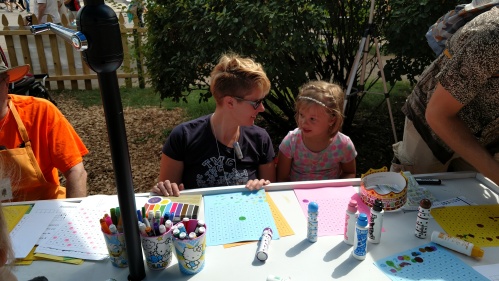 I’m sitting on an airplane, about to embark on a nine day professional development bonanza in Baltimore, Maryland.  Right before we were given the airplane-mode directive I get this message from Christopher Danielson:

Now, quick background:  I adore Christopher, everything he creates, his wife, his kids, and pretty much all that he touches.  I’m being hyperbolistic (which is totally a real word) but if you made a word cloud of my blog posts over the last year, it would be borderline embarrassing how large the words Christopher and Danielson would be.  S0, to make a long story a little bit longer, I was out-of-my-mind excited about this opportunity and wanted to text everyone I knew.   The hawk-like gaze of the flight attendant made that a difficult pursuit.  Anyway, it was a long flight.

Fast forward through a handful of prototypes, test runs with the resident 5-year old mathematician of the household, 250 colored card stock copies, and a pep-talk from the Professor himself, I was ready to hit the Minnesota State Fair to be the visiting mathematician/artist at Math on a Stick.

I settled on using 1-100 at the recommendation of Christopher because many children would be familiar with a hundreds chart either from home or school.  I could easily help kids made the transition from that familiar chart to this “different” way of arranging the same 100 numbers.  Making that comparison was something I would not have thought of, and it ended up being incredibly important.

Admittedly, I was a tad nervous that my idea would flop.  That all of the fun I’ve had with this spiral wouldn’t translate to a wider, younger, more playful audience.  All of that fear melted away when that first adorable young face sat down, and grabbed a marker.

One of my favorites of the day was the girl who figured out that if she colored the multiples of 10 and then connected them, they turned into triangles.  Always triangles.  She tried again with multiples of 5, with the same result.  The glow in her eyes was precious.

Simply stated, this was one of the most fulfilling mathematics experiences I’ve had ever.  What Christopher Danielson has created with Math-on-a-Stick represents the paradigm shift in the way adults view mathematics through the playful exploration of children.