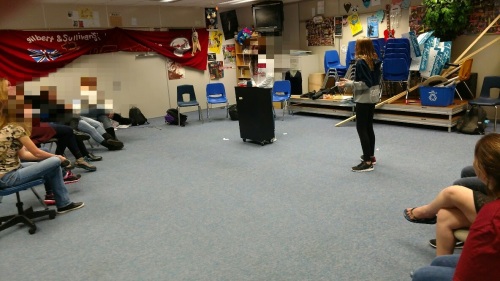 My prep period is the last hour of the day, which means the rest of my day can seem sort of like a hurricane, where I pass through the eye here and there.  Today, mid windstorm, I get the email I dread:  “I know you don’t like to sub on your prep, but I am down to my last two teachers, and I need a sub for Ms. XY.”

Great.  It’s Friday of a week where Monday was Halloween.  My to-do list was growing so although I don’t normally prefer subbing, today I REALLY didn’t want to.  But, I couldn’t turn this one down.  It was an emergency.  So, I sulked and complained to whoever would listen and felt sorry for myself until 1:25 when I had no choice but to mosey up to D238 and unlock the door for the eager students waiting outside.

Me:  What class is this?

Wonderful.  To add a twist to my already knotted demeanor, it was a drama class (did you hear my dramatic tone?). Don’t get me wrong, drama class is great.  I just know nothing about it and feel powerless to assist anyone amid a sea of teenage angst.

The sub plans were pretty clear:  The kids will be memorizing their lines for the play until 2:00 and then they will rehearse in the drama room.  So the students went to their rehearsing spots and got to work.

At 2:00, we convened in the drama room and that’s where I was blown away.  The students realized that they were missing many of their classmates today (deer hunting opener) and attempts to rehearse would be futile.  Someone suggested they play “Whose Line is it Anyway?” (A hilarious TV show from the early 2000’s if you have never seen it.) They gathered their chairs around and threw out scene ideas and set the stage and off they went.  Then for 15 minutes, they flawlessly improv’ed like they had been doing it for years.  The classmates not on stage laughed, listened intently, and gave their peers their full attention.  I didn’t see one cellphone out.  Not one.  Not once.  When there were 5 minutes remaining, they played a game called “Splat” (which I’m proud to say I participated in) in which speed and acting like a household appliance are requirements. 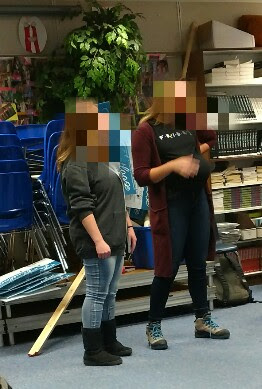 Scene:  A pregnant woman and her wife shopping for baby items

So what did I learn:

At the end of the day, I left that drama room with a lifted spirit and joy in my heart.  I also left wondering how I could develop that kind of excitement over learning in my own mathematics classroom.  I still covet my prep time, but I’m grateful to have gotten this opportunity to see this different student learning world on the other side of the building.