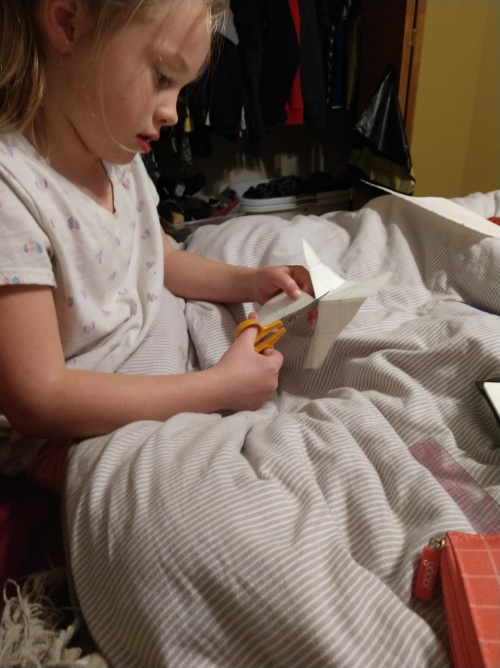 Have you ever handed a compass to a child? After they satisfy their initial curiosity that one of the ends is pointy, have you ever then seen what a child does with that compass? I recently attempted this experiment with my 7 year old daughter. Her immediate discovery: She could make a flower by strategically constructing 7 circles.

I wanted to have a conversation with her about the 7-circle arrangement and see what geometric understanding we could build on from what she noticed and wondered.

She identified shapes and “non-shapes,” talked about shapes that could fit inside other shapes, and developed methods of determining whether or not certain shapes were congruent. She was most interested in cutting out figures and seeing what the result was when she folded them in different ways. My favorite observation of hers was with respect to the image on the left. She described it as “the top of a rocket ship being built on a really strong stick.” What’s important here is she made sense of what she observed and then justified it based on what she knows to be true: The rocket needs to balance on a strong, vertical stick in order to be completed. She is developing her own understanding of geometric relationships. It is much less important that she can produce an output that matches one of the 1st grade Minnesota Academic Standards in Mathematics. We can build up to understanding specific standards, but only after we have a foundation based on what she has already made sense of herself. In this case, the sense-making began with my handing her a compass and then having a conversation with her as she explored with it.

If you walk into a typical secondary math department, often the compasses can be found collecting dust and developing rusty hinges in the back of the supply closet. And these ancient tools have been traded for more updated technology such as animations of classic geometric theorems such as the perpendicular bisector theorem. Here is an example from a popular geometry textbook:

You can draw your own conclusions about the usefulness of this example and how it can help students develop an understanding of perpendicular bisectors. But what I notice, besides that the perpendicular bisector theorem has been dwindled down to a series of steps to understand, is that the reasoning behind the compass arcs is unclear and somewhat ambiguous. Additionally, the students are not given an opportunity to explore their own curiosities and play with the mathematics. They are left with a set of steps to follow without ever having connected this idea to a circle or a compass.

What would happen if instead we gave students a copy of this image (or better yet, let them draw it for themselves):

What questions would they ask? What properties would they explore? What would they notice and wonder? And if they didn’t hypothesize about perpendicular bisectors (or regular hexagons or symmetry), how could we as secondary math teachers lead them down the path of making sense of this theorem?

Here is another image from Don Steward’s blog which could ignite similar curiosities:

He begins with an initial question, but what else might your students ask about this particular design?

Geometry class is ripe and ready for these kinds of interesting, beautiful explorations, yet our textbooks insist that students need to be shown steps and procedures to understand these theorems well enough for a standardized test.

Sometimes we are fearful of using manipulatives in math class because we are afraid that kids will “play around” with them. But in order for them to do sense-making, to develop a lifelong appreciation for, or even love of mathematics, isn’t that exactly what we have to let them do? They need a chance to play and wonder, conjecture and experiment. We need to believe that children (and yes, high schoolers) can develop powerful mathematical ideas, and if these ideas do not perfectly align with our mathematics standards, we need to develop strategies to build from student sense-making.