Yesterday:  As much as I get frustrated by the attitudes and actions of my 5th hour, much of my resentment stems from the fact that I believe the situation in my class is my fault.  I feel like I’ve conditioned them by accepting disrespectful behavior in order to keep kids in the classroom.  As a result, the entire learning environment has suffered.

Today: So that was the beginning of yesterday’s post. I was concerned going into today’s class. Last Friday of the year and the fact that the school has been a circus compounds the issue. I was expecting chaos, but what I got was mathematical success. The difference was I demanded their attention in a more respectful way. I was firm, but polite, and it payed it’s dividends in student engagement.
We began with a simple math talk that I modeled from Fawn Nguyen’s March 21st math talk:

Today is the 30th day of the month.  Write as many equations you can that equal 30.

I gave them about 5 silent minutes. Then I let them use their calculators to come up with more gems.  At the end, I had them share their favorite or most complicated equation on the whiteboard. 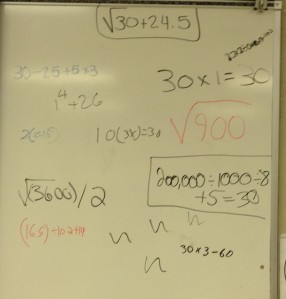 Here’s where the real magic happened.

Me:  Look up here and see if there are any equations you disagree with

Lots of discussions ensued about order of operations, square roots, rounding, parentheses, etc.  Overall, the activity lasted 30 minutes, which was about 29 more minutes of math than we did yesterday.

But the fun doesn’t stop there.  To boot, I introduced the Mathalicious Decoder Ring Lesson.  We watched the Christmas Story clip and talked about what a decoder ring does.  What I liked is that most of them were trying to figure out how the decoding worked, rather than just “get the worksheet done.”

Justin Aion stated poetically on his blog today the exact way I feel about this class:

We teach students long-term strategies to accomplish short-term goals and often don’t see any progress.  If we are very lucky, we’ll see the kind of growth we want by the end of the school year, but the growing season on students isn’t as regular as it is for other crops.  Each seed needs its own time to grow.We desperately need to get away from the notion that if it hasn’t sprouted by the beginning of June, then it must be a defective seed.