“I’ve been married for forty-two years which means I’ve been to forty-two state fairs.”  I’m not sure why this little tidbit from the Park-and-Ride attendant didn’t instantly put me in great spirits.

And then I walked up over the hill, took one look at Math-on-a-Stick, and the indifference melted.  The humble smile of satisfaction from Christopher Danielson was enough to warm the cockles of my heart for months.  But the kids and the konversations around shape, number, space, and patterns were nothing short of inspiring.  “This is exactly how I envisioned this,” Christopher said.  And his vision becoming state-fair reality is going to change the way parents and kids talk about math.  I love hearing kids explain their reasoning.  It’s what makes my job as an educator joyous.

Dear Adults: (all of us)

The children in your life are creative, driven, passionate, and intelligent.

GET OUT OF THEIR WAY.

Ask them how they see the pattern. Let them experiment with the shapes.  Let them lead the conversation.

Listen to what they notice. Encourage them to say more.

Then ask them how they know.

The “right” answer is so much less important than a child leading you on their own mathematical journey.

Thank you, Christopher.  Today you not only added a great new structure to the landscape of the Minnesota State Fair. But tonight, in hundreds of households, the conversation around mathematics is changing. And after nine more days, thousands more will get a chance to embrace this shift.  When my husband and I have been married forty-two years, we’ll go to the fair and stop by and listen to the kids talk at Math-on-a-Stick. 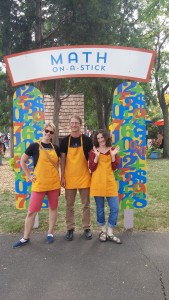 The following prompt presented at Twitter Math Camp by the Mighty  Max Math Forum (aka Max Ray) has been rattling around in my brain for the last few weeks.  Here a grid representing streets in Ursala’s town: 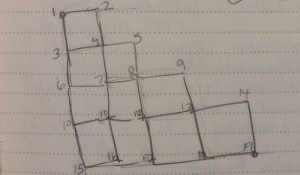 The problem-solving session, masterfully orchestrated by Max, allowed each group of teachers to develop their own representation of the situation and think about what questions could be asked. For example, if Ursala is at point 1 and needs to get to point 19 along the line segments, without backtracking, how many ways are there for her to travel?  Lots of discussion ensued at our table including the definition of backtracking.

I’ve been at school the last few days and anyone who has sat near me at a meeting in the last few weeks has seen me doodle this scenario, I’m sure wondering what my nerdy math-brain was concocting: 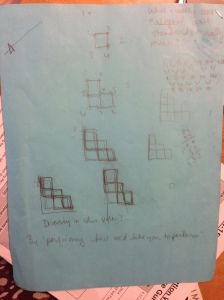 Simplifying the grid and turning it into a pattern expanded the questions that I wanted to ask.  For instance, how many line segments (or streets) in Ursala’s case) are used in step n?

What I’m still grappling with is how to expand my wonder about this scenario past the algebraic representations.  In talking with other teachers recently, it seems as though many of us have been programmed to solve these, and many other problems algebraically.  I recognize that many students won’t reach for the algebraic aid.  So my next step is to try to see this situation in other ways, sans algebra to better understand how my students are likely to see it.

I love it when students figure stuff out.

I love it even more when:

A.  Students figure out things that, as a teacher, I didn’t  notice myself.

B.  Students who are labeled as “not good at figuring stuff out” figure stuff out.

Here’s what we did today in Algebra 2:

This is a SMILE resource from the National STEM Centre.  The problem I thought I would encounter is the word “etc.”  Kids don’t do well with “etc.” Etcetera is vague, non-committal, and easily dismissed.  To a student, etcetera usually means “I’ll ignore this and see if no one notices.”

It is helpful for me to be more specific with my expectations of students, especially when their mathematical well being is at stake.  But today, I was feeling a little vague and non-committal myself, so I handed out the sheet, explained what was going on and let them go…etc.

There are no words I love to hear more in my classroom than “Mrs. Schmidt, look what I figured out.”  And today was chock FULL of those statements.  Here are a few:

There were lots more.  I was very proud of this class’s resolve in addressing the Etcetera.

If you have little kids and you’ve been privy to an episode of Team Umizoomi, then perhaps the title of this post evoked a little jingle in your head. You’re welcome; I’m here all day.

My daughter, although she doesn’t choose Umizoomi over Mickey Mouse as often as I’d like, picked up on patterns relatively quickly after watching this show a couple of times.  She’s 3 years old, and she finds patterns all over the place.  Mostly color and shape patterns, but a string of alternating letters can usually get her attention as well.  These observations of hers made me realize that pattern seeking is something that is innate and our built-in desire for order seeks it out.

High school students search patterns out as well.  For example, I put the numbers 4, 4, 5, 5, 5, 6, 4 so that the custodian knew how many desks should be in each row after it was swept.  It drove students absolutely CRAZY trying to figure out what these numbers meant.  I almost didn’t want to tell them what it really was as I knew they’d be disappointed that it lacked any real mathematical structure.

Dan Meyer tossed out some quotes from David Pimm’s Speaking Mathematically for us to ponder.  This one in particular sheds light on this absence of pattern working in high school mathematics:

Premature symbolization is a common feature of mathematics in schools, and has as much to do with questions of status as with those of need or advantage. (pg. 128)

In other words, we jump to an abstract version of mathematical ideas and see patterns as lacking the “sophistication” that higher-level math is known for.  To be completely honest, this mathematical snobbery is one of the reasons I discounted Visual Patterns at first.  Maybe it was Fawn Nguyen’s charisma that drew me back there, but those patterns have allowed for some pretty powerful interactions in my classroom.   I’ve used them in every class I teach, from remedial mathematics up to college algebra because they are so easy to  differentiate.

I think high school kids can gain a more conceptual understanding of algebraic functions with the use of patterns.  For example, this Nrich task asks students to maximize the area of a pen with a given perimeter.   The students were able to use their pattern-seeking skills to generalize the area of the pen much  more easily than if they had jumped right from the problem context to the abstract formula.

I also notice that the great high school math textbooks include patterns as a foundation for their algebra curriculum.  For example, Discovering Advanced Algebra begins with recursively defined sequences.  IMP also starts with a unit titled Patterns.   I think these programs highlight what a lot of traditional math curriculums too quickly dismiss:  patterns need to be not only elementary noticings of young math learners but  also valued as an integral part of a rich high school classroom.